—   Tens of millions of seahorses are traded each year as pets, trinkets and for use in traditional medicine.
—   But the greater threat comes from incidental bycatch by indiscriminate fishing gear, according to researchers.
—   Seahorse researchers argue that improving fishing practices would protect seahorses, as well as many other species and their habitats.

Some of the fishing boats around Phu Quoc Island off southwestern Vietnam use trawl nets that drag along the seafloor, catching everything in their sweep. Others send divers into the water to snag seahorses by hand. A recent study in the journal Fisheries Research by the Canada- and U.K.-based conservation group Project Seahorse estimates that between 127,000 and 269,000 seahorses are taken from the waters off this one island each year.

Around Phu Quoc seahorses are harvested intentionally, but that isn’t the case in most places. By and large it is indiscriminate fisheries ensnaring seahorses as bycatch that is putting populations under pressure, the group contends.

Phu Quoc isn’t the only place where fishermen target seahorses. In the Philippines, for instance, fishermen go out at night with lanterns and handpick seahorses from the ocean. But the study found that fishermen around Phu Quoc are using not just diving gear but also, for the first time on record, bottom trawls notorious for their destruction of the seafloor to specifically target seahorses. Some local fishermen earn the majority of their income from seahorse fishing alone, said Allison Stocks, a marine biologist with Project Seahorse, who led the study.

According to a separate report from Project Seahorse, both incidental and targeted fishing results in an estimated 16.7 million seahorses caught across Vietnam every year. Contrary to past studies, which found that Vietnam’s seahorse consumption was small, the new report estimates that up to 40 percent of seahorses caught in the country enter the domestic market, which the authors say is both large and unregulated. Live seahorses are sold in shops on islands like Phu Quoc. Both live and dried seahorses end up in tonics (purported to cure backache, increase sexual virility, and much more), which are popular throughout the country. Others are dried, painted and made into key chains and other trinkets.

Many more seahorses, live and dried, are transported internationally, primarily to China. Worryingly, the researchers found that most Vietnamese seahorse exports were illegal and unreported. By Project Seahorse’s estimate, around 20 million seahorses are traded around the world each year.

Kealan Doyle, a marine biologist and founder of the Irish NGO Save Our Seahorses, believes that the number is likely to be much higher. His organization floats figures as high as 150 million seahorses, which it extrapolated from undercover work in Chinese markets. But Sarah Foster, a program manager at Project Seahorse, says she hasn’t seen data that supports such a high number.

Trade in all species of seahorses is regulated under Appendix II of the Convention on International Trade in Endangered Species of Wild Fauna and Flora (CITES). That means countries may issue export permits only if they can prove the trade isn’t harmful to wild seahorse populations. In 2013, Vietnam became the first country to face an export ban by CITES due to high levels of trade of the spotted seahorse (Hippocampus kuda), which is popular due to its large size and attractive speckled complexion. The ban remains in place.

Since then, a handful of the 80 exporting countries have decided to self-impose export bans until they can monitor the impact on wild populations. This list includes Thailand, one of the world’s largest exporters, whose decision to halt trade in 2016 theoretically shrunk the legal trade in seahorses considerably. Other big exporters to self-impose bans include China, Malaysia and Indonesia.

But Daniel Kachelreiss, a marine species officer at the CITES Secretariat in Geneva, said that export bans, or “zero-quotas,” like these don’t necessarily help conservation of the species in question.

“Having a zero-export quota is a way of more visibly saying we cannot make a NDR,” he explained, using the acronym for “non-detriment finding” — a study proving the fishing doesn’t harm wild populations. He added that if underlying threats, such as bycatch, are not addressed in tandem, a ban could have little effect at all. 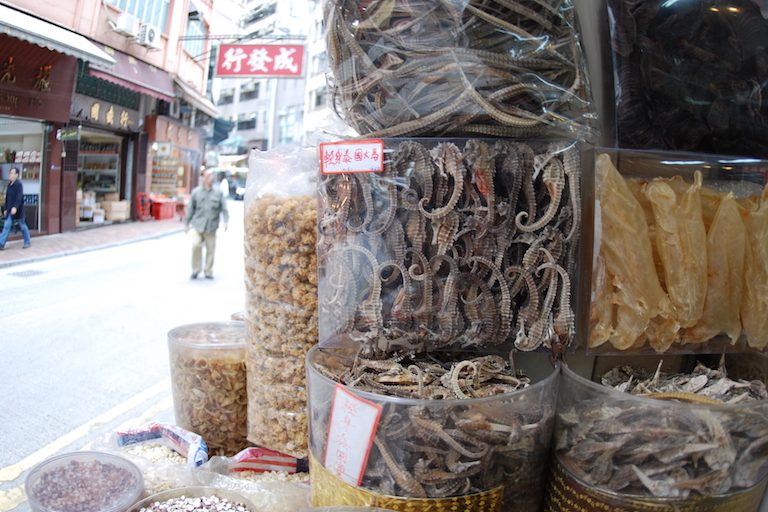 Foster said she believes it’s unlikely that the bans halted all trade and that it’s probably occurring at similar levels, only now out of sight. Moreover, the majority — up to 95 percent — of seahorses taken from the water are caught as bycatch in trawls and other indiscriminate fishing gear, not by targeted fisheries like the one in Phu Quoc, according to a 2011 paper she co-authored. Some of this incidental seahorse catch enters the international trade; some does not. “Even though there is a trade ban, that fishing is still happening,” Foster said.

The median bycatch numbers are quite low, one seahorse per vessel per day, which can give the false impression that bycatch is not a problem, she and her colleagues found earlier this year. In contrast, designated seahorse fisheries can result in far higher catch rates; in Vietnam the team found rates of between 23 and 32 seahorses per vessel per day.

But when the number of fishing vessels sailing out daily around the world is totted up, those single bycaught seahorses quickly become millions every year. Project Seahorse estimated that 37 million seahorses are caught this way in just 22 countries each year. The number caught incidentally around the globe is probably much higher.

There are at least 43 species of seahorse, all in the genus Hippocampus, and they are incredible specimens of evolution. The ancient Greeks seemed to have known this as they depicted the god Poseidon’s great chariot pulled through the Mediterranean by seahorses. Maybe the Greeks were impressed by their camouflage capabilities, which allow them to blend seamlessly into a bed of coral, or their coiling, prehensile tail, which can anchor them to almost anything in their watery habitat.

Male seahorses also go through a true birth. The female deposits eggs in a male’s pouch and leaves him to brood the young. Many species are monogamous, mating with one partner for their entire lives. “They are just magical,” Foster said.

Unfortunately for seahorses, those same adaptations are playing against them in a human-dominated world. Their camouflage abilities make them rather difficult to study and monitor, and their monogamous nature means that killing or capturing one is more like killing a few thousand future seahorses because the partner does not mate again, Doyle said.

Nobody is sure how populations are doing in the wild generally since there have been no systematic surveys, but some appear to be declining locally. In unpublished research, fishermen around Phu Quoc reported that seahorse catches had declined by up to 95 percent between 2004 and 2014.

Many species of seahorse cover a wide geographic range, so global extinction is unlikely. But extirpations, or local extinctions, are a real possibility for some heavily exploited species like H. kuda, according to Foster.

That may sound like a piece of canny marketing, but the group says that measures to protect seahorses, such as stopping harmful, non-selective fishing practices like bottom trawling, also aid other small fish and the ecosystems themselves.

Foster said that enforcing bans on coastal trawling in Thailand and Indonesia, particularly in protected areas, would be a good start.

Off Phu Quoc, for instance, the few protected marine areas are not respected, Stocks said. She has frequently seen buoys used to mark the no-fishing zone washed up on the shore after being cut, presumably by fishermen. And she said catches from small vessels are not regularly inspected — a common occurrence in large fishing countries around the world.

In Doyle’s view, however, what is needed to secure the future of seahorses is community buy-in. He said that when people see the benefits of protecting their local fauna, they’ll be more likely to do so.

In Vietnam, Stocks saw that local people continue to fish seahorses, and anything else for that matter, as long as it makes them money. The seahorse decline hasn’t gone unnoticed by locals, and many understand that if current fishing rates continue, seahorses could soon disappear from the area. But needs must: “Fishing is how there’s food on the table. That’s how they survive,” Stocks said. “It’s kind of like if I don’t do it, someone else will.”

This applies to catch-all fishing as well. Eliminating bottom trawling would do away with one of the major threats to seahorses, as well as numerous other species and their habitats. “But what does that mean for the people? Is that realistic, unless there is a system in place to provide alternatives?” Stocks said.

She and other experts consulted for this story agreed that a sustainable trade in seahorses is possible. Positive steps are being made in the aquarium trade, for instance, where the availability of captive-bred animals has reduced the pressure on wild seahorses.

But achieving full sustainability means answering questions that go far beyond the Hippocampus genus and the waters of Phu Quoc. It means dealing with the methods used in both industrial and small-scale fishing and, ultimately, figuring out how coastal people can maintain their livelihoods.

In August and September last year, thousands of Papuans demonstrated across Indonesia to oppose the occupation of West Papua....

Philippines to Turn Over ASEAN Chairmanship to Singapore

What Happened To The Billions China Pledged The Philippines? Not what You Think

IPOs down to a trickle, but Asian bankers not losing hope yet