Indonesia’s Citarum river burbles past terraced rice paddies and quiet farming villages in the highlands of West Java, as it begins to wind its way hundreds of kilometres towards the sea.

But the charm evaporates swiftly as the river, often labelled the world’s most polluted, descends past crowded zones of factories and homes that dump a pungent stew of garbage, waste and sewage into its 300-kilometre stretch.

“The water looks like it has been mixed with the waste, and sometimes it smells like ointment,” said Nurhayati, who lives in the riverside town of Majalaya, 130 kilometres southeast of Jakarta, the capital. 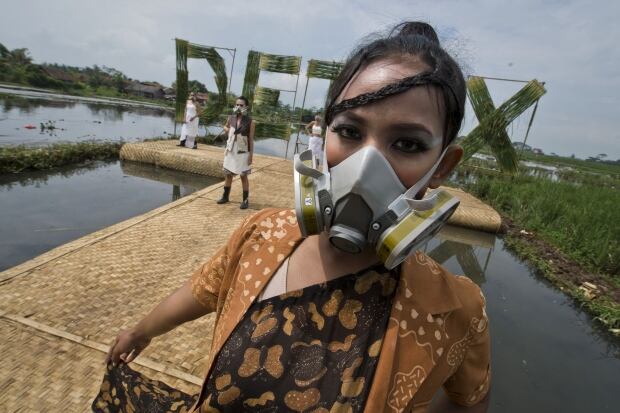 “They throw the dyed water into the smaller rivers that flow into the Citarum,” Oegroseno told Reuters. “The small branches, sometimes they’re white, sometimes black, red, blue or yellow.”

His ministry is spearheading a new campaign to achieve President Joko Widodo’s ambition of making the water in Indonesia’s most strategic river basin drinkable by 2025.

Long before it hits the sea on the eastern shores of Jakarta Bay, the river turns into a toxic cocktail the colour of coffee.

Children fly kites and play beside piles of floating trash in some parts of the river, but others avoid it as being a mere garbage dump. Yet further downstream, women in conical hats work in fields irrigated by the river.

They are among the 28 million people who depend on the river waters, which supply Jakarta, support 400,000 hectares of rice paddies, sustain fish farms and fill reservoirs that generate about 2 gigawatts of hydropower.

Getting tougher on factories

The key to keeping the river clean will be educating people and toughening enforcement of environmental controls, said Oegroseno, who vowed to shut polluting factories and make them fund cleanups.

“Right now we are giving them warnings,” he said.

Hundreds of soldiers were recently posted along the river to retrieve garbage, which gets burned as part of the ambitious program backed by more than 10 ministries, local government, community groups, the police and the military.

Activists and green groups blame the failure of the government’s previous cleanup efforts on a lack of monitoring and difficulties enforcing regulations.

Last May, Greenpeace and several community bodies won a long court battle to revoke the permits of polluting factories in Rancaekek, on the outskirts of Bandung, where the group says pollution caused losses of 11.4 trillion rupiah ($831 million US).

“We found that waste water permits were handed out from year to year, but no one was evaluating the impact on the environment,” said Ahmad Ashov, one Greenpeace campaigner. “There was no monitoring.”

“We do supervise, but the manpower we have is not enough,” Sudarna told Reuters, adding that equipment also fell short.

“We are fixing this.”

Deni Riswandani, an activist who demands tighter pollution measures, estimates 1,500 industries dump 280 tonnes of chemical waste in the river each day, but said that even with evidence, it was tough to enforce environmental rules.

“It’s a long process, it’s expensive and they play games.”

Majalaya resident Nurhayati said she played in the river when she was younger and continued to use its water for washing and drinking, even after the factories and pollution arrived.

Her two children have had skin problems, she said, adding, “I’m worried, but what else can I do? There’s no other water.”

The bank believes such a measure would help improve the quality of education and in effect narrow the widening...

Thailand’s democracy hangs in the balance

China on track to launch Mars probe in 2020

Overseas remittances to Vietnam’s HCM City increase in 1st half